“CLIMATE sceptics are jubilant. In a reprise of the run-up to the Copenhagen climate-change summit in 2009, a fresh batch of possibly compromising e-mails has been released on the eve of the latest round of UN climate talks in Durban, South Africa. "All your favorite Climategate characters are here,  once again caught red-handed in a series of emails exaggerating the extent of Anthropogenic Global Warming, while privately admitting to one another that the evidence is nowhere near as a strong as they'd like it to be."

Don’t you love this: ”the evidence is nowhere near as a strong as they'd like it to be"?

When have you ever known a scientist to say the evidence is the evidence is “as a strong as they'd like it to be"?  They are never satisfied!  They are always searching for errors and points that need adjustment.

On the other hand, “Dr Watson thinks that nothing in the e-mails challenges the fact that the world has warmed significantly in the last 100 years and that this has most likely been caused by human beings spewing greenhouse gases into the atmosphere.”

OK – two possibilities: Either we are contributing to global warming, or we are not.  We cannot say we are the “absolute cause”, because there is more than enough evidence to show warming and cooling are cyclical realities spanning thousand of millennia.

But we might be making global climate worse.  Or, as critics argue, having no effect at all.

Does anyone refute that we are making it dirtier?  Hence making the air denser to sunlight.

Does anyone refute that dirt makes things worse? Or that a dirty window has different light properties than a clean one?

So whatever we are doing, there is no rational doubt that we are affecting the environment in some way.  Thus it falls to the doubter to PROVE that we are mitigating, or improving, the heating that would be part of the natural cycle.  Just saying we aren’t making it worse – well, who  gives a damn!

We know we are making the world dirtier and less healthy to our species.  We need to correct that – if that means mitigating global warming, than gee wiz willy curs … guess we get a free benefit.

But look to those who dispute global warming – the same “MOST HARM TO MOST PEOPLE” group that opposes healthcare, taxes on rich, and shipping our jobs to foreign nations while borrowing all it can from whatever nation wants to own the United States.

Weird as it might seem, where we put are values, what we deem important reflect upon the adherence to Christian Doctrine.  Look at the chart: 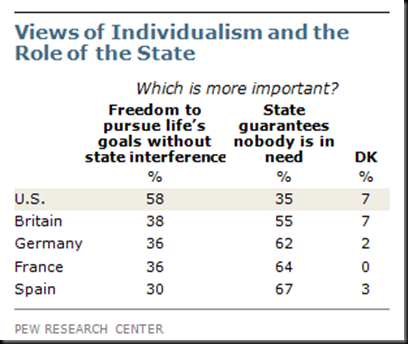 “Nobody is in need” – help your neighbor, the poor, the sick – don’t count the change in their pocket, just address their obvious basic needs.  Half as many Americans as Europeans believe in those basic principles.

Look at the Evangelicals, or Republican Party they support:  Anti-Education, Anti-Medical care, Anti-LIHEAP (the money that provides heat to the poor during the winter, which they recently cut by about 50%).

The so-called Christians & the GOP implementers of their policies, are opposed to alternate energy and promote rampant fuel consumption.  Worse, they are disarming the nation – so as to ensure ultimate victory for terrorist.  HOW?

Clearly, you haven’t read my earlier blogs.  If we consume our limited oil supplies, while leaving the massive foreign supplies intact, we will lack fuel for our tanks and planes – if we ever again have a true enemy.  Al Qaeda need only control the OPEC nations to win its Jihad.  We pump our fuel out – run dry – and they can charge anything they wish for their resources.  We pump our fuel out – run dry – and our army cannot be mobilized – we will have no fishing or shipping industry – we will have no cars.

Even electric cars need an external power source.  But they aren’t building windmills (as the Europeans are doing).  We are not taking advantage of geothermal energy, … or solar.  When we really need it, who will provide the technology?  And at what cost?

Yep.  American is anti-Christ in all its actions.

Specifically, American Christians are Anti-Christ in everything they support and promote.  If that were not true, what Republican could stand and claim that G-D spoke to him, as was spoken to Moses?

- The Most Harm To The Most People -

It is the Most Republican

It is the most American Christian

Thing you can do.

Seems the reports of his death – while accurate as to the fact that he is dead – were knowingly false as to the way he died.

Osama died grabbing for an automatic rifle.  That simple.  He did not go quietly, and it was – MOST DEFINATELY – NOT a kill mission on the part of the troops engaged in the finale.

Only real issues involved are: How could this guy have lived where he did, for as long as he did?   And, how could a guy who supposedly needed regular medical treatments – using expensive equipment – receive that treatment and not be on international radar screen?  How di the Republicans under G.W. Bush manage to conceal his whereabouts that well?

Bush must have actively concealed the information from the troops.  Or how could a new administration have so easily have found the most wanted man in history?

Concealment by Bush is consistent with the fact that Bush followed an 1990’s Osama directive seeking to eliminate Saddam Hussein – and destabilize the most stable Islamic (American allied)  government in the region .

Hey neat though … in exactly twelve months we get to vote the Republicans back into that position of power … wonder what they are planning?  Think they’ll again double the national debt and invite the terrorists to destroy another landmark structure?

You willing to bet your future and that of your children and grandchildren that that isn’t exactly what they have planned for 2013 and the decade to follow?

Be a good Republican & bring

- the Most Harm to the Most People -