The Republicans are making it clear that they are intend on polluting as much of the western water supply as possible.  The current goal is two fold, first allow oil pipelines through water aquifers – and be sure to allow them to be easy targets for any terrorists – assuming that nature does not cause a leak first.

Reuters 29 January 2012: “Republican lawmakers will try to force the Obama administration to approve the Canada-to-Texas Keystone XL pipeline by attaching it to a highway bill that Congress will consider next month, House of Representatives Speaker John Boehner said on Sunday.” but also “Attaching Keystone to a pending deal to extend payroll tax cuts for workers, which has greater bipartisan backing than the highway bills, is another vehicle Republicans are considering.”

Keep in mind, the Republican goal is, and will remain, “The Most Harm to the Most People.”

If western water supplies escape contamination, it is still important to see that continental oil reserves are depleted.  Unless they are, there will be no means by which al-Qaeda and its successors can out last America in energy reserves necessary to power our military-industrial-complex.

The Republican objective is clear: Waste money on a military machine which is outdated and ill-advised … one that requires door-to-door combat to locate an unidentified enemy in clearly hostile territory.  Keep in mind: terrorists don’t need uniforms and don’t concern themselves with the Geneva Convention.  It is the terrorist method to kill anyone at any time – even civilians usually women and children within the nations granting them support and shelter.

The Republican objective is clear: pump all our oil out of the ground and waste it in as many ways possible; then we become fully dependent on middle eastern oil reserves.  In 1945, Nazi Germany was fully dependent upon those same resources – they ran out of fuel and lost the war.  The Republicans want us to be totally disarmed and helpless against al-Qaeda … why?  Their leadership is being funded by the same guys who fund al-Qaeda, the Taliban, and all the other terrorist organizations.

In November we get another chance to empower the Republican party and expedite its clearly defined dual efforts to bankrupt and disarm America … “The Most Harm to the Most People” … it is the American way of life – or, soon will be. 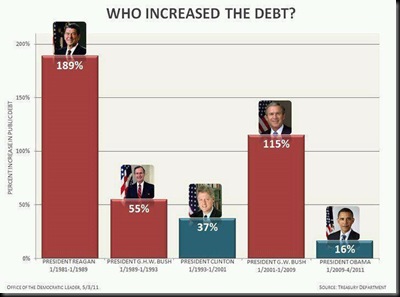 This is what happens when you elect a Republican.  Reagan nearly tripled the national debt. Bush Sr. add 55% to that, and Bush Jr doubled that …  phrased another way, Thanks to the Republicans, we now owe $963 for every $100 we owed in 1980.  What do we have to show for it?

NOTICE: as the debt multiplied, so did the amount of money going into the pockets of the top 1%.  Also, the economy collapsed.  SO!  By increasing the debt, we borrowed to make the super-rich twice as rich.

In the process, we fell behind the rest of the world.  DID YOU KNOW China is now headed for a cashless society where everyone has  comfortable pension, full medical coverage and a top rate education?

The average Chinese has a credit card – and you get strange looks if you use cash.

Who do we owe the money to?  The Chinese?  :-D YEP … and they’re making life better for their citizens … at the cost of our economic security.  Seven hundred years ago, China was the world’s economic super-power … fifty years from today, if things go the GOP way, they will be again …. with no effort on their part.

ENJOY THE YEAR OF THE DRAGON

THE MOST HARM TO THE MOST PEOPLE

Consider this: George W had a 56% approval rating at this point in his administration … he doubled the deficit, and plunged us into a recession … plus let Bin Laden run free.  Obama’s approval rating is lowest of previous three presidents and disapproval rating is higher … he must really be doing something right!  Republicans, who gave BW a 90% approval rating – so he could ruin the country --  gave Obama a 13% approval, … again indicating Obama is doing everything properly … after all, “THE MOST HARM TO THE MOST PEOPLE” crowd hates the guy.

November promises to be an interesting point in American History.  We can elect a Republican, and put an end to the American experiment, or we can re-elect Obama and see the nation prosper.

Then too … there is 21 December to deal with … which party do you want to see handle a global crisis of mystical proportions?

Republicans want “THE MOST HARM TO THE MOST PEOPLE” – and they represent the End-of-the-World-Second-Coming crowd … so regardless of what really will happen after 21 December, we know they are going to do everything in their power to ensure national and global catastrophes are possible.

Watch them on OIL drilling … they will promote it.  That means, they will promote the unnecessary expeditious  depletion of oil oil reserves … while leaving the Al Qaeda & OPEC  reserves intact.  That also means the nation will, in under 20 years, be without a domestic fuel supply – nothing to fuel our planes, ships, or industry (aside from air polluting dirty sulfur infused coal … emphasis on home heat).

Imagine coal for home heating, or to produce the electric for said heating … imagine refurbishing every building in the nations to use coal … imagine how black the air will be.

NO NEED – without oil, we have no military and that means any petty terrorist group that has oil will have us in their sights – and we’ll be sitting pigeons.

OR How about CHINA … their one child policy  is now generating a surplus of men … potential soldiers … can you imagine an army of surplus males being aimed at us?   Their surplus is now four times larger than the total of ALL soldiers who fought in WW2…. that is ALL – from every country involved in the conflict at any one point in time.  Their surplus is FORTY time the total population of the State of Maine…. and we would have no fuel for cars, trucks, tanks or planes…. so we would need to fight on foot … door-to-door … if they were so stupid as to NOT flatten our cities first.

OH … send a thank you card to your neighborhood Republican … do it now, before there is no way to power mail delivery … thank them for their diligent promotion of:

“THE MOST HARM TO THE MOST PEOPLE”

“toddler APPEARS to use a bleeped curse word.” – did she or didn’t she use a word that they are objecting to?  Do the idiots even know the word they believe was used?  Did she drop the famed “'F-bomb'”?

Or was it a dramatic scene typical of the first time a kid says something which is not age appropriate?

Does any rational person really care?

Clearly the irrational ones do.

“The tot is played by Aubrey Anderson-Emmons, who says the word "fudge" during taping.” … so ire is raised by the famed ‘F-bomb' … FUDGE!

MY BET:  We should be taking the names of all whose ire is raised… in the years to come they will be responsible for murders of children and destruction of societies.  They will impose slavery on those who cannot fight back and torture those who attempt to fight back.

MY BET those who are the most evil in society are the first to complain about dramatic works, and works of comedy taken from everyday life … they are also the first to promote real horrors and atrocities.

TAKE THEIR NAMES – remember them … they will be the source of evil.

... GOP under Reagan & Bush doubled National Debt (so four times where it should be) Bush ran the nation into the ground by reducing tax revenues from those with a surplus of income and removing money from economy by taxing the lower groups with the least disposable income. NOW GOP candidates say Obama is the problem. We have recovery -- despite active GOP opposition. (And remember Clinton -- he ran a surplus that Bush ended so he could plunge us into debt) RESPONSIBILITY WHERE IT BELONGS - DESTROY THE USA vote GOP.

According to GOP Candidates:  Obama is responsible for “the 820,000 jobs lost in January 2009, despite the fact that Obama didn’t become president until the 20th of that month. It also includes the 726,000 jobs lost in February 2009, before any of Obama’s policies had gone into effect.”

No problem… we need the GOP in power … it is the only possible way to destroy America and bring about global war – which they will insist upon escalating into all out nuclear war … or they will invite terrorist attacks … remember, Bush had the opportunity to nail Bin Laden and withdrew the troops so they could attack Hussein … that is, GOP supported ignoring guy who kills thousands of Americans and destroys a economic landmark … so they can attack our allies against IRAN and its nuclear program; destabilize the region and strengthen Al Qaeda.

PLEASE VOTE GOP – it is the best way to affirm a basic hatred for the American Dream… currently held by a third of the nation.