President and their kinship to five sisters

There are five sisters who are the direct ancestors of every president and their ancestor rules Europe.
Every POTUS can have one dot to be in the family -- represent the Ruler Ancestor and then they have the dotes from the sisters -- each sister is a color,,, their names don't matter, the color tells it all.

Bernie Sanders would break the historic pattern... but then, if Trump were Impeahed and convicted by the Senate, Mike Pence would also shatter the pattern.
We are in an interesting time in history.  An age when the era of the POTUS COUSIN might come to an end: 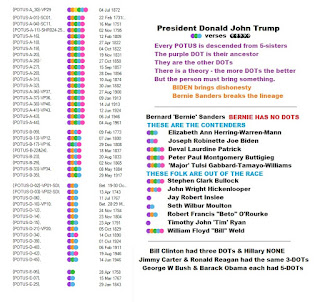 We now, 15 years after GRANDPA WAS A DEITY was published, are getting more detailed data on the founders of western and Chinese civilization.
It comes in the form of a research paper The phylogenetic and geographic structure of Y-chromosome haplogroup R1a where the line we're interested in is shown in figure1, under branch Z93 sub-branch M780.

As with all my books over the past 40-years, it takes time for the research to fill in the grey areas and confirm the obvious.  In this case, eventually the connection will be made to the Hebrew Levite and, if we ever get proper data from China, to the founders of that civilization as well.

Pete Buttigieg could be POTUS -- he's a POTUS COUSIN

Researching Pete Buttigieg has revealed he is a verified POTUS COUSIN.
What that means is, in terms of American History, he would fit right in with all the other Presidents -- more important, he conforms in terms of the criteria used in the 2017 book Jonathon's POTUS Cousins" {Amazon, January 2017}

As of this writing, which is the same day NEXT 2020: Avoiding Reality Choosing the Wrong One (Trump Card) Paperback – December 23, 2019 went live on AMAZON,  we can be assured that Joseph Biden is no longer viable ... unless the nation wants a President who is a sure-fire impeach and convict.

As with Tulsi Gabbard, and another highly viable candidate, Mayor Pete has served in the Military -- the two could be a nice ticket.  And then we have Deval Patrick -- a POTUS COUSIN who is the product of a marriage between two POTUS COUSINs.  The three offer an interesting historical opportunity... the First Female, a Military Major; The 2nd Gay POTUS and 1st openly gay one; the 2nd, African-American and the affirmation of an end to racism in America.

With Impeachment in Limbo until Pelosi delivers the necessary nonsense to the Senate ... and Christmas two days away, the Second Day of Chanukah has now begun, and so we move forward into the year of FUN.  Which Candidate -- other than Trump -- can keep the longest economic expansion in history going, will build a border control wall/fence to address the problems of Climate Migration, and all the other issues which MUST be addressed over the next four years?

Americans are STUPID & The TRUMP IMPEACHMENT Proves it.

Something is very wrong in America.  Supposedly educated individuals are complete idiots.
OK!  In the past, we could laugh at those who fell for easy cons.  Things like PT BARNUM hanging a sign that said, "This way to the Egress" among all the exhibit signs which also said " This way to the... ", knowing that most of his audience did not know "egress" meant "exit".
The crowds which were so captivated by the exhibits would then exit and thus make room for more paying customers waiting to enter the exhibit areas.
Today, the House Leadership have become the modern Barnums and IMPEACHMENT is the exhibit, with terms like "quid pro quo" and "bribery" serving as the modern "egress".
We are told there is "bribery" and "self-benefit" in asking someone to "do a favor" and "obey a treaty signed by our two nations."
According to Pelosi, Schiff, and Nadler, following a twenty-year-old treaty to share information discovered in criminal investigations is "a personal benefit for political gain" and not a simple acknowledgement of an international anti-crime or anti-corruption agreement between nations.

Yet, it appears that telling a foreign head of state that they will not receive military support promised and authorized by Congress, and signed into law by the President of the United States, unless they fire the head of a major branch of government is OK.
The fact that Congress and the President placed no such condition on the life-saving assistance is irrelevant.  As is the fact that people were dying and the assistance was intended to stop the death of more.
On some levels, it wasn't even "real" assistance -- it was the equivalent of co-signing a loan so the nation under attack by an aggressor nation could buy weapons to defend itself.
Threatening the survival of a free nation in the face of an active attack on that nation is acceptable practice -- if it means the political removal of an official other foreign officials don't like and cannot control.
Some help the official was corrupt, so corrupt that his continued employment justified allowing millions to die and a nation to be enslaved by a power recognized as your political and military enemy.
There seems to be no problem using Mafia Don tactics, saying your people did if this person is not gone in six-hours.  Oh, and it's cool to replace them with someone more corrupt...so long as the replacement is "solid" and follows MY orders.  After all, I have the power to overrule Congressional Legislation and  Presidential signature -- just ask the President ... And the clock is ticking.
There is nothing criminal or improper in such a Mafia Don declaring he controls the government and its elected leaders.  This is exactly the person we want -- especially when the alternative is someone who "asks a favor" that the law embodied in a treaty be followed and information shared.
Image we were talking about one of many treaty agreements to share scientific discoveries -- regardless of whether they affirm or refute a theory of causality -- would it be a crime to ask that a copy of the report be sent your head scientist?
Would there be personal criminal benefit in knowing and being able to say that there is or isn't a causal relationship between two events?
Maybe knowing how a common substance is related to a disease...
Apparently, acquiring such knowledge as agreed it was to be shared is a crime.
But there is no crime in denying lifesaving medicine to a nation that's dying unless a clerk is fired immediately -- overriding the directions of a chief medical board and it's leadership -- is ok and the sign of good leadership.

Oh, in terms of treaties and lawful behavior.  The same Mafia Don is on record declaring he had the power to nullify the First Amendment of the American Constitution.
He could, according to his own words, legislate away all of America's basic freedoms and rights.
This man people want as President.
Why?
Because they believe a President who terms it a favor to have a lawful treaty followed is nothing more than a fascist dictator.  And it certainly helps their case that the nation is more prosperous than it has been in fifty years, and that minorities and women have more economic or social equality than at anytime in the national history.
Clearly, that is wrong and just be corrected.
We need the Mafia Don who said he could take away all our rights, the rights of women, minorites, and institutions -- like those of journalists or the media -- with simple legislation (and the appointment of justices who were "solid" and would obey him and not the law of any standard of ethics).

Will the 2020 Democratic nomination establish the people want their Mafia Don?  And then, will the election affirm it?by

We have another comic idea.  That the Book of Revelation was accurate -- now that is something the Mafia supporters would reject, if only because the dating system as applied has proved to be objectively accurate.
And we know the Mafia Don has said we are to accept "Truth over Facts" -- his truth, the truth the masses accepted in the children's tale of THE EMPEROR'S NEW CLOTHES.l

The book that dates Revelation is:  Books_w Biblical Prophecy: Are we in the Revelation Era - Kindle edition by W. Lawrence Lipton. Religion & Spirituality Kindle eBooks @ Amazon.com.

Avoid these book...Avoid all the books by this author, one who has been a WHO'S WHO IN WRITING author since the first year (1981) the exclusive journal was compiled.  That he was also listed in similar works in FINANCE AND INDUSTRY before anyone heard of Donald Trump -- and TRUMP might not even be considered worthy of listing ... Though they do, naturally share listing in Who's Who in the World.  But such listings are, of course, meaningless... Or so says his oldest son who, since his childhood days attending school and playing people like the once famous actress known as Mia Sara, or kids who's parents were all listed too... And today looks at those he deals with or represents on a daily basis and sees such compilations as just another client listing -- albeit one that happens to include multiple family members as well.A

And YES!
Why not boast and brag a bit?A

If the timeline holds, the European economy folds in 2027, the Third World War is recognized by 2035, and we already have scientists telling us that, by 2050, a third of all current life will be dead or extinct.

So Shush...keep quiet...don't tell anyone the Emperor is Naked -- it's important for world events and the death of America that we stay quiet.
Though it's equally important that we be on record as Warning people.
As the Bible says (Rule of Solomon) they cannot be held accountable unless they have been told.
There is no need for them to listen...they just need to be told.

CONSIDER YOURSELF TOLD -- even if you didn't actually read this far!