Speak truth to Power -- who will Trump Target Next.

It is not a question... it is a statement.  "who will Trump Target Next." is a concept that acknowledges -- at least on the floor of the British Parliament -- that Trump will show bigotry and discrimination against other innocent people.

It is sad, disnerving, and frightening that the first POTUS to honor election pledges is the one who pledged hatred and bigotry -- pledged to close a wall around America and effectively remove it from the global economy.
It if horrorifing that the prediction in "Death Over Life: A Prophecy of America's Destruction" {Amazon, March 2014} be proved so accurate.

Worse, because the book was a test case of the system applied to Revelation -- as explained in "Biblical Prophecy: Are we in the Revelation Era" {March 2014} -- which would seem to establish the calculation is correct and that we are, therefore only 18-years away from the much anticipated and feared 3rd World War which is to be the common name for ARMAGEDDON.  It will, as the Koran proclaimed, be a war between the West and Islam... a war in which all the BAD CHRISTIANS shall be ordered killed (perversely, in the name of Jesus, who the Bible says specifically stated He would disown).

But that is "SAINT PAUL'S JOKE" {Amazon, September 2012} -- the proud violation of the Bible by Evangelicals is the same judgement that will bring about their death.  Their water will be poisoned {possibly by KeyStone XL} they will die of disease -- because they rejected universal healthcare and the protection it offers.   They will die because the Four Horsemen know who they are and the Bible they wave around tells us that people will say "BABYLON THE GREAT CITY HAS FALLEN" and expression which means "AMERICA THE GREAT NATION HAS FALLEN" --  which is the phrase that goes with saying it must be made great again.

Horrifically, that makes Trump the 2nd Angel... the Holocaust in which at least  144,000 Jews vanished among those 6 million who died at Nazis hands ... and the coming of the first angel.

Fortunately, not even the Bible Banging Evangelicals believe in the Bible -- and so the prophecy can unfold as a normal and predictable occurrence consistent with human history and behavior.

How nice... we know the pattern... it is presented in "Jonathon's POTUS Cousins" {Amazon, January 2017}
How delightful ... How old will you be in 2035?
How old when the city of the seven hills is destroyed?
An event that is due soon....
But nobody believe these things.

Trump and The Constitution’s Emoluments Clause,

Keystone Pipeline and the "ethics" Lawsuit against Trump are examples of the U.S. Constitution’s Emoluments Clause, at work.
But, of course, you do NOT get it.

No Title of Nobility shall be granted by the United States: And no Person holding any Office of Profit or Trust under them, shall, without the Consent of the Congress, accept of any present, Emolument, Office, or Title, of any kind whatever, from any King, Prince, or foreign State.
ARTICLE I, SECTION 9, CLAUSE 8

The extreme right wants the harm that Keystone Pipeline can cause...
The U.S. Constitution’s Emoluments Clause, states that Congress (as a result of the majority of Americans determining the want it so, the extreme right now controls Congress) is the one who determines if there is any problem with the funds Trump receives from the real world of Capitalist business...
They now OWE HIM -- and will pay him back by approving his play with regard to his business interests.
The alternative is, of course, for them to decide they would prefer Mike Pence to be President -- in which case, it does not matter what Trump does, the extreme-right will join with the extreme-left and together they will, in a bipartisan drive to destroy America, remove Trump and install Pence.
Are you going to enjoy POTUS PENCE -- who hates Healthcare, Hates Social Security, Hates Public Assistance, Hates Immigrations and ... well, he HATES everything that is good for the people and is deeply devoted to inflicting THE MOST HARM ON THE MOST PEOPLE.
ALSO, he is NOT a POTUS Cousin -- the last POTUS who was like Trump was Andrew Jackson ... like Trump with Keystone Jackson supported the destruction of Indian Rights and lands.
PENCE has absolutely no connection to American History and. as such, would be the first POTUS in 228-years with no heritage to protect... he will happily destroy the nation.
U.S. Constitution’s Emoluments Clause, at work... trade a possible harm to get leverage to prevent a major destruction ... or, as the left-wing seems dedicated to ... cause that major destruction.
"Jonathon's POTUS Cousins" {Amazon, January 2017}
[ https://www.amazon.com/dp/B01N5R99Z5 ]
meets
"Death Over Life: A Prophecy of America's Destruction" {Amazon, March 2014}
[http://www.amazon.com/Death-Over-Life-Revelation-Destruction/dp/1497427169]
and America dies.

The ethics lawsuit being threatened by an unnamed, or specified, "US legal watchdog" is based on idea propagated by a group of lawyers and researchers who claim Trump is receiving payments from foreign governments via guests at his hotels and leases on his buildings.
They argue that a clause in the constitution bans such payments because they somehow fit the definition of "[accepting a] present, Emolument, Office, or Title" from a foreign government.
That being the case, any foreign visitor is rendering such a gift to every store they shop at, every paid transportation they hire, every meal they buy, while in the country.  Thus, if a Congressman or public official holds an interest in any business used by foreign visitors, they are accepting bribes by accepting payment for services rendered.
But the real fun is the intellectual and legal competence of these alleged "watchdogs".
Consider the key jurisdictional phrase/clause "without the Consent of the Congress".   That means The US Congress, NOT The Courts, has jurisdiction to determine if money received for hotel services etc is a PRESENT to the POTUS... or "a salary, fee, or profit from employment or office." So, is the POTUS employed by the Hotel, or its guests when he is the owner?
Not that it matters -- since the issue is for the Congress to decide... and it affect any and all investments they might have -- including those in those supposedly "Blind Trusts".  Just as with a "Blind Trusts", a Corporate Business owner who is not involved in day-to-day managerial operations is only aware of net profits received and not the explicit source of those funds.
Not that it matters -- since the issue is for the Congress to decide and not the Judicial Branch.  The best the court can do is issue a default biased pre-determined ruling which needs not hear arguments by opposing counsels -- the court MUST state that the funds violate the law... since only Congress has the authority to say it does NOT violate it.
Such pre-determined rulings, made without any evidentiary basis, are themselves violations of legal ethics -- the term "Kangaroo Court" comes to mind.
American Justice is being flushed down the toilet when a group of anti-American idiots can bring a nonsense lawsuit against the President of the United States -- in obvious and complete violation of the US Constitution statement of Jurisdictional authority.
But it is another step toward the fulfillment of the prophecy of America's Destruction
"Death Over Life: A Prophecy of America's Destruction" {Amazon, March 2014}
[http://www.amazon.com/Death-Over-Life-Revelation-Destruction/dp/1497427169]

We all know about the attack on Obamacare and Medicaid/Medicare.  But that is only the tip of the attack iceberg.

Just before the Inauguration, Republicans in the House made their move to undermine Social Security and ensure fewer Americans were able to file claims.
The goal is a continuation of George W Bush's attack on Social Security.  New proposed legislation will raise the retirement age from 67 to 69 -- the average American can expect to live to 79 {in Japan life expectancy is 86).  But the American age is beginning to fall; while life expectancies in other Industrialized nations are increasing toward 90, America is moving back toward 70.  If healthcare can be attacked, the average will continue to fall as the poor drag it down.

Raise Retirement Age and it will approach the falling average until the poor die before they qualify for retirement.  Chairman Sam Johnson, the Republican Chairman of the Social Security Subcommittee of Ways and Means, introduced a bill that would deeply cut Social Security Income.  If the legislation passes and is signed by the President, it will affect all Americans born after 1967.

Nancy Pelosi mentioned how Speaker Ryan is preparing cuts in Medicare which will accompany legislation cutting Social Security benefits by more than a third.  Cost of living adjustments will be slashed, as will benefits for the families of disabled and retired workers.
This is a summary of what is about to happen: 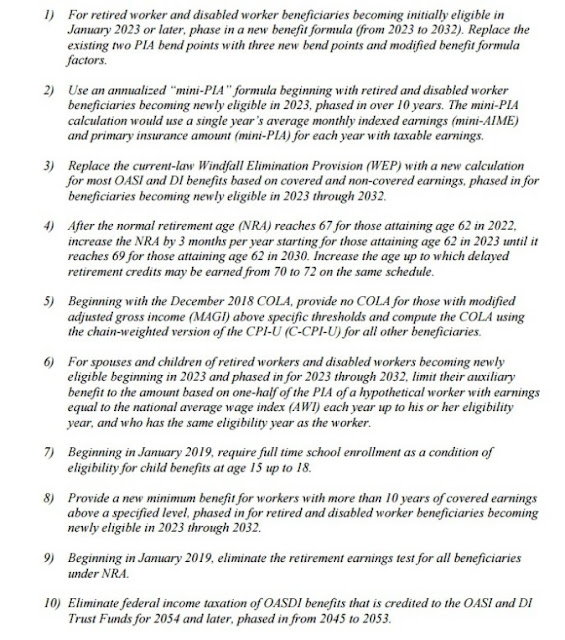 As readers of "Jonathon's POTUS Cousins" {January 2017}are aware, 49 -- known as the Hebrew value OMER -- is an important number in the past history and future.  That it comes it comes into play now gives it a mystical connotation which should scare the hell out of Evangelicals who are supporting the right-wing elements invoking this anti-Bible attack on the elderly.  For everyone else, it means the generation after the Baby-Boom is being singled out -- the last Baby-Boom baby was born in 1966/67.

For Evangelicals, it is important that the dating of Prophecy explained in "Biblical Prophecy: Are we in the Revelation Era" {March 2014} and successfully tested with the book "Death Over Life: A Prophecy of America's Destruction" {March 2014} -- which predicted the 2016 Election, and provided the basis for Trump's campaign slogan.
As the book publication date establishes, the book predated Trump's campaign by 15-months.

America is in trouble.  Not because of Trump -- it is the right-wing Republicans he outfoxed for the nomination and the crybaby Democratic-Progressives who are out there yelling "Not My President".  The latter will arrange for Mike Pence to become POTUS by making it profitable for Donald Trump to resign.
With Pence in the Oval, THE MOST HARM TO THE MOST PEOPLE agenda will be unleashed and unrestrained.

The prophecy of America's Destruction will then be free to move forward and that unleashes the Islamic State for World War Three in 2033...

America elected a right-wing Republican Congress and everyone wants to focus on Trump who hasn't even been sworn in yet.

The Congress is the one trying to repeal Obamacare ... Trump wants it replaced with an improved version which covers more than the 30 million currently covered.

But oh gee Trump's the bad guy. Trump, the guy with the huge ego who is mindful of his place in history and legacy where the rightwing is devoted to THE MOST HARM TO TYHE MOST PEOPLE destroy the nation and history be damned. YEP, attack Trump and give the rightwing a free ride ... maybe even give them POTUS PENCE and really give them power.

But the media likes to attack and waste time on the wrong targets.
It's the rightwing Republican Congress that should be under attack... not the guy who they hate.

They yell about connections to Russia but Wikipedia description of Heathcare in Putin’s Russia: “The Constitution of the Russian Federation has provided all citizens the right to free healthcare under Mandatory Medical Insurance since 1996. In 2008, 621,000 doctors and 1.3 million nurses were employed in Russian healthcare. ... About 5% of the population, mostly in major cities, have health insurance.” Healthcare in Russia Wikipedia

America is 132 years BEHIND Germany... and counting. America is so years behind Russia... and fighting to go in the opposite direction.
But all this was predicted in March 2014 ... "Death Over Life: A Prophecy of America's Destruction" {March 2014}
[http://www.amazon.com/DeathOverLifeRevelationDestruction/
dp/1497427169]
America was predicted to go rightwing and selfdestruct ... the media is just aiding in that destruction.
Posted by shreknangst at 1/19/2017 06:09:00 PM No comments: Links to this post