As the 2008 Election Now Stands

I am a World War Two baby, which means I have seen the history of the Korean Police action, Vietnam and all the “regime change” military adventurism which has marked the anti-Communist, and post Cold War ears. I existed during the Normandy landing, and the Battle of the Bulge; as my mom loved to tell the story, my first expressive words – my first words with historic value – were “Atom Bomb”; which I said a “ammon bomb.”

Listen to the debates, Huckabee – who will not survive the nomination process – speaks of leaving Iraq in terms of “Victory and Honor”; and he insists the discussion should be about “winning.” How does an invader win, and still exit? Our side won World War II, and sixty years later our troops are still in Europe. We have yet to exit after that clear and undisputed victory; how will we win and exit from a conflict, a sectarian civil war, we started? The Republican debate of 31 January spoke of our presence in Iraq lasting a hundred years.

The Republicans are invoking Ronald Reagan and what he would want to do now. Have they no historic knowledge? Ronald Reagan ran the largest deficits in American history; at least they were the largest until the current GOP administration decided to abandon budget surpluses and borrow from China to finance the invasion of Iraq.

I knew Ronald Reagan, it is a matter of historic record that my dad helped establish the Reagan machine in New York State; as I type this, on the wall, over my right shoulder, is a commemorative plaque which Regan sent from the Whitehouse when my father died. It is a basic historic reality that the mantel of Reagan is one of fiscal irresponsibility and war mongering.

The Reagan mantel has been taken up is clear from the echoes of “victory with honor” which were the hallmark of the Republicans – and their hard hat followers – during Vietnam. The goal is to bankrupt America, and send more of our children to die – or facilitate al-Qaeda killing Iraqis – so that we can acquire honor from a dishonorable action.

The price to be paid is selling our future wealth to China, devaluating our dollar and thus increasing our cost of living, and ignoring the needs of our citizens in favor of – as one GOP candidate phrased it – blowing up bridges in Iraq and then rebuilding them, while bridges in America are falling down.

It is now clear that John McCain will likely be the Republican nominee. We Bush first ran, I published that I was opposed to him, and stated that I would not counsel against voting for him; I would not do so because I wanted to see if he would be as disastrous a president as I was projecting – Bush only need initiate an Iranian War to complete the package; and Bush still has ten months to have our troops in Iran for, at least, a month when the new president takes office. John McCain will, in his own way, out-Bush Bush. As the people of Washington County seem to enjoy their poverty, obviously supporting McCain is exactly the correct thing for them – we need a new Great Depression.

On the Democratic side, it’s been a year since I stated, though desiring the Whitehouse, Hillary had decided to not be a serious Democratic candidate – she is now the candidate the Republicans wish they had. Hillary wishes to prove she can out fight, out cajole, out macho, the image which Bush has unsuccessfully sought to achieve. As a President, it is likely that she would be little better than McCain and far worse than what our nation now needs. McCain-v-Clinton would be a historic race; possible one which would also revise the Gore-v-Bush delegate imbalance between Electoral College and Popular votes – with nation losing regardless of which count prevails.

As a matter of legislative record, and consensus building, Obama leads the opposition. Not that you will hear much about his actual record; or even garner why he emerged as the “fair-haired-boy” at the National Convention four years ago. Obama seems to offer the possibility of returning this nation to the fiscal or social conservatism to which other candidates hypocritically pay so much lip-service.

Will Obama obtain the nomination? Most probably. Were the Clintons as politically astute as they have been portrayed, they would have reached out to Obama to join forces – they might still. A Clinton-Obama, or an Obama-Clinton, ticket would clearly win against someone those who invoke Vietnam and the “Victory with Honor” rhetoric which caused the death of roughly sixty thousand of our best and brightest.

Being ancient is not all it is cracked up to be.

I was born at the dawn of time. I have traveled the evolutionary pathways and seen that which was to be seen. My ancestry is ancient and – though it has made few marks which the texts recount, yet all texts recount its passage – important in the annals of history.

My ego though as great as the universe which tries to contain it, is as small as, smaller than, the most insignificant microbe.

I have seen the passage of people who have crossed my path.

Today the news tells of one who I met more than forty years ago. He was but approaching twenty-two, I only about twenty. He was known, and I – as now – unknown on the edge of knowing. He had been taught, I had learned, as I have throughout the ages, by watching.

Though we spent our high school years a few blocks apart, he attended Erasmus Hall High School, I attended Brooklyn Tech. He dropped out at 16, I graduated at 17 – given that reality, the mere nineteen months which marked our separate entry into this historic age was enough to ensure we would not have met anywhere but across a chessboard.

We finally met at Lisa Lane’s “Queens Pawn” where, while Lisa traveled Chess Tour circuit and I attended NYU, I served as manager of her Chess Emporium – playing notable regulars and the occasional visitor such as he.

He was a true chauvinist and a Master above Masters on the sixty-four squares. We played several games – and none would doubt I lost them all quickly and decisively. But, at least, I can say I played him one-on-one in an environment which offered no showmanship excuse, no exhibition, no purpose other than to play the game and occasionally talk.

At the height of the Cold War, he defeated the Soviet Union's Boris Spassky to become America's first and only world chess champion. To that day, and since, the Soviets, the Russians, held the game to be their national pass time, their source of international pride, and the world championship was their personal property – this young man took it from them, without breaking a sweat.

He was a national treasure which our national leaders scorned and sent into exile. In retaliation, he denounced the nation and, interviewed on a Philippine radio station, praised the al-Qaeda strike on the World Trade Center while expressing his desire to see America "wiped out."

As we now know, the sitting president took this call to heart and has since been doing all he can to destroy the nation over which he rules. We watch as Bush bankrupts America, going deeply into debt to Communist China, and allowing China to use our children as dumping grounds for toxic waste they would never consider sending to Europe.

He was, this master, a boy from Brooklyn who, a true intellectual and genius who, it is said, had a "running battle with the rest of the human race." I can and do relate to that idea. 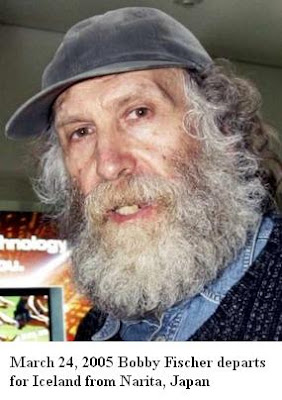 Robert James Fischer, International Grand Master, born March 9, 1943 in Chicago, Illinois to Jewish parents (or certainly a German Jewish mother who had escaped the Holocaust); died January 17, 2008 in, and as a citizen of, Reykjavik, Iceland. An American Jew driven to become both anti-American and anti-Semitic in an age when both groups are being attacked from within by the national leadership and its supporters.