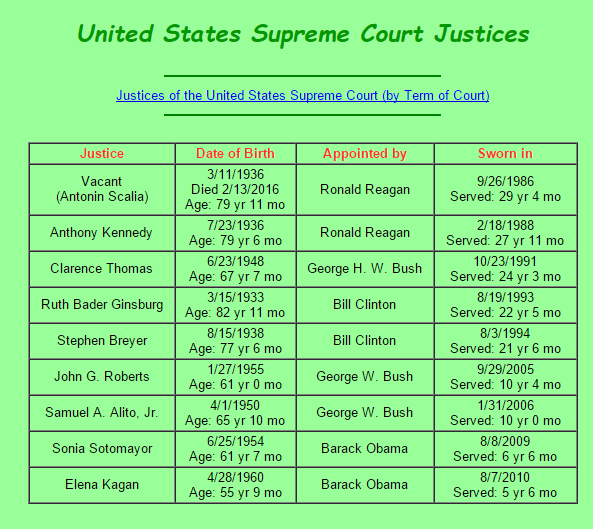 Supreme Court Justice Antonin Scalia died just a month short of 80.  That would give Kennedy five month; Thomas 12 years 4 months; Ginsberg is exactly two years past  that age; the rest are young enough to last past the November election -- and are split with one BUSH41 & one Clinton; two BUSH43 & two Obama appointments...
In theory, 2016 is a critical year for America.  Ideally, the theory is wrong, but the math has been tested against past events and appears to work -- "Death Over Life: A Prophecy of America's Destruction" is either correct or it is not ... but there are too many ways for it to be correct.
Donald Trump achieved one by his slogan "Make America Great Again", which infers America has fallen from greatness, and that copies with the prophecy of people saying "Babylon the great city has fallen."  Therefore, the prophecy is fulfilled, and yet, it could go the next step and bring down Washington for real.
Would that, could that, mean the death of the Republican Party -- a general defeat which sees the 35 Senate seats all go Democratic along with the POTUS office?
Would that, could that, mean the death of the Democratic Party, or Liberals?  It would mean an end to the laws promoted in the New Testament, and an end to the TRUE Christian doctrine of caring for others -- the ultimate fulfillment where America really does become "The Great Satan" and so justifies the horrors the Jihadists are advocating... A Third World War.

If Ginsberg and Kennedy die withing the next six months, the Supreme Court becomes a useless judicial entity.  The average American expects to live to 78.74 years; Breyer, Ginsberg, Thomas are in line to die.   With Thomas it's a racial probability thing; Ginsberg is age -- though being Jewish, she could likely make it to age 84-86, and Jewish women have been known to push 100.
The countdown is on.
Will the Republicans obstruct the government further than they have to date?  Or will they facilitate consideration of the nominee Obama presents and thus negate any possible loss of another Justice?
In terms of  "Death Over Life: A Prophecy of America's Destruction", THE MOST HARM TO THE MOST PEOPLE is the Republican right-wing Tea Party agenda ... that means obstruction rules the day.