It seems curious that the Russians hacked where there was the Internet.  That was where Clinton did the best... and when they started hacking she did BETTER'

Comically -- either Russia was backing Hillary, or the hackers were grossly incompetent.  Trump won because they couldn't adjust for the Electoral College.

NOW Sanders and Warren are attacking the Electoral College -- they want it gone so Trump can not win again... but Russia wants it gone so its propaganda will be successful.

Fortunately, Americans are idiots and will happily destroy themselves.   They adhere to the classic line, "to hold a man down in the mud, you must get in the mud with them."

Arte Johnson CURIOUS FACTS -- does he really have a twin, and where was he really born?

It's a bit curious.  Supposedly Laugh-In's Arte Johnson (20 Jan 1929-03 Jul 2019) was born in Brent Harbor, Mich and has a twin brother named Coslough "Cos" Johnson who outlived him.
Yet, do a search and a curious fact emerges -- the date and birth certificate are in Chicago, Illinois {Certificate Number: 2350 Illinois, Cook County, Birth Certificates} and there is no mention of a twin by any name ... there is a brother, Howard Leonard Johnson, who was born on 08 Nov 1931 {Certificate Number: 45677}.

Does the twin exist?  Or did Howard pass himself off as a twin brother?  Or maybe, Arte used the twin to "moonlight" as a writer.   In any event, where is COS?  are there photos that are post-Arte's death -- maybe at the funeral?
Since Arte just died, we will see in a few days ... Arte's family are Russian Jews, so the funeral should be down within three days or so. 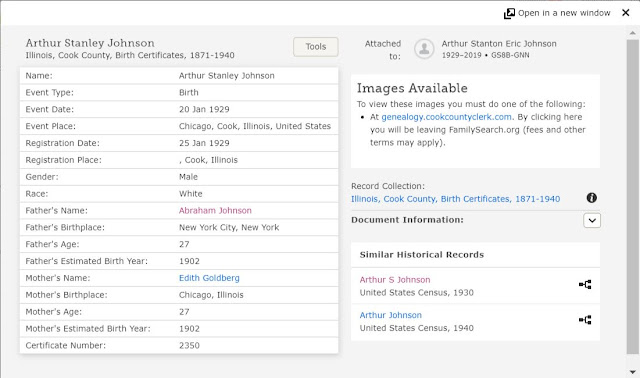 UPDATE 5 JULY 2019 --
This appeared as a correction or addition (after 4 July Notes from Shreknangst (49080548))  on FIND-A-GRAVE: "Edith Johnson, nee Goldberg, beloved wife of the late Abraham, loving mother of Arthur “Arte” (Gisela) of California, and Howard “Cos” (Mary Jane) of California; fond aunt and great-aunt of many. Service and interment Wednesday, 11 a.m., at Westlawn Cemetery, 7801 W. Montrose, Norridge. Contributions to the charity of your choice. Info, The Weinstein Brothers Chapel, 312-761-2400.  —Chicago Tribune, 8 Oct 1996, SW_A8
It would seem the Arte Johnson award-winning "TWIN" mentioned in WIKIPEDIA is really his baby brother.
More inconsistencies are emerging.