Looking at “An end to the government shutdown ???” we have a list of al Qaeda operatives in the United States Senate… one of them has taken the opportunity to express his (or is it their) opinion on Iran.

Sen. Marco Rubio of Florida, introduced a Senate resolution calling for more pressure: “No one should be impressed by what Iran appears to have brought to the table in Geneva …Tehran has broken its word far too many times to be trusted. Due to its complete disregard for previous international agreements, we must take a firm stand in all negotiations regarding the nuclear capabilities Iran is permitted to retain.”

Of course, as an al Qaeda, Rubio has informed us that the terrorists have their eyes on both Iran and their nuclear potential.  The term, “FIRM STAND”, as defined by Rubio’s desire to see the American Economy plunge of a cliff to its death as a world force, clear means force them to engage in military action.

It should be noted that, effective 2015, the Senate Banking Committee wants us to boycott Iranian Oil.   These are its members: 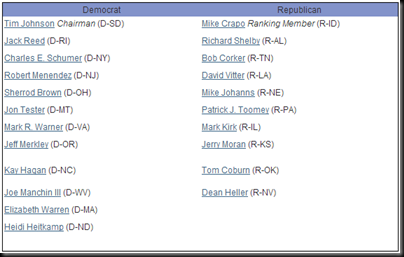 Dean Heller (R-NV), Tom Coburn (R-OK), and Richard Shelby (R-AL) appear to be the al Qaeda moles on that committee.  We all know the power of Canadian Ted Cruz (R-Tex) as instigator of the Shutdown and controlling force in the effort to destroy the Constitution and the Nation.

The Most Harm To The Most People

as a force of nature, it is growing.